The northern sky may stake claim to the awe-inspiring Aurora Borealis, but the sea can put on an impressive glow-show too, powered by a natural phenomenon known as bioluminescence.

Bioluminescence is the emission of light produced by living organisms. Children often first encounter this extraordinary spectacle in the form of “fireflies” or “lightning bugs,” but bioluminescence can also be commonly found in bacteria, algae, jellyfish, worms, crustaceans, sea stars, fish, and sharks, just to name a few. There are some 1,500 known fish species that can create luminescence.

In fact, our oceans are so vast and so dark that bioluminescence may very well be the most common form of communication on the planet.

In addition to communication, bioluminescence can serve other purposes too, including camouflage, mate attraction, and warding off predators. Some species of fish even dangle an illuminated “lure” in front of their mouths to attract unsuspecting prey.

In addition to sea creatures, the sea itself can also glow. Well, not really. But that’s how it appears to us.

Although surreal glowing surf might look like something straight out of the 1989 sci-fi movie, The Abyss, bioluminescent seas actually have nothing to do with UFOs or alien species. The U.S. Navy began researching bioluminescence after a German submarine was sunk in World War I while leaving a glowing trail that was easily spotted by surface ships. Later, Apollo 13 astronaut Jim Lovell used bioluminescence to find his way back to an aircraft carrier when his navigation systems failed. By turning off his cabin lights, he was able to see the glowing wake of the U.S.S. Shangri-La and safely land.

So why does the water sometimes glow? 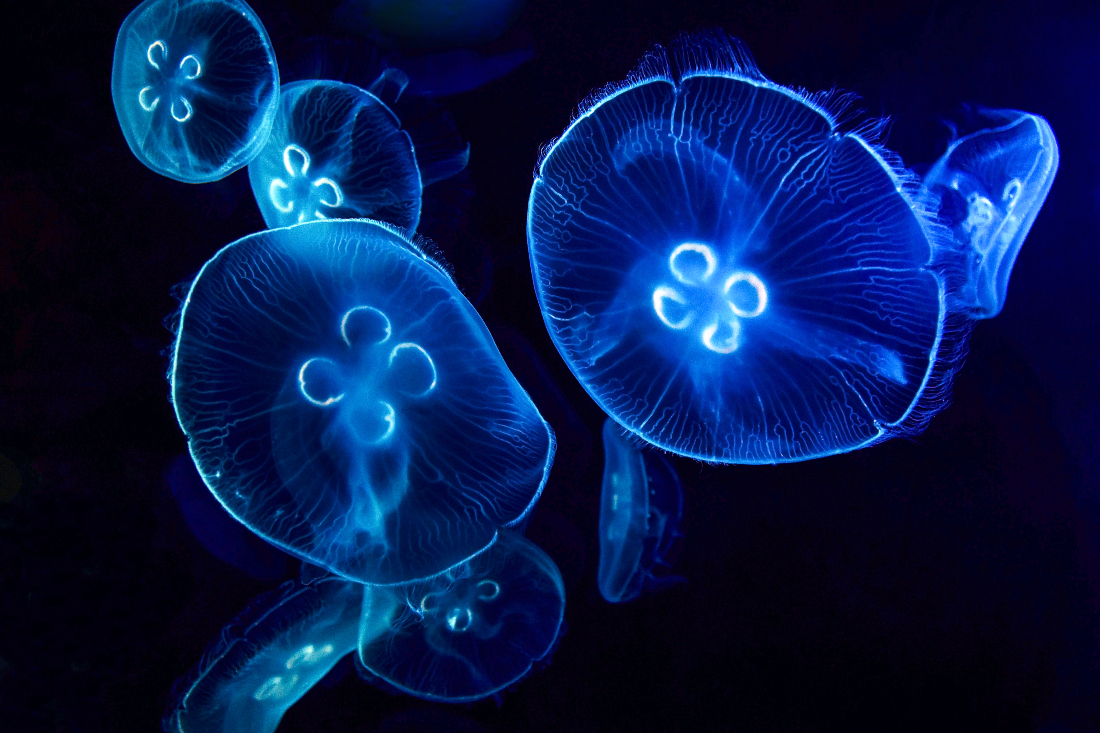 Tiny, surface-clinging dinoflagellates are to thank for this beautiful, mystical effect. Often described as marine plankton, these single-celled organisms have characteristics of both animals and plants. They’re a valued food source for crustaceans and fish, and they produce oxygen when they use carbon dioxide and water to make their own food. When disturbed though, dinoflagellates emit light. This glow can be caused by nearby predators, waves crashing against them, the bow of a boat striking them, or even a kayak paddle slicing through the water.

Curious observers have been known to travel great distances to witness these lights, and there are some world-famous bioluminescent bays, including Vietnam’s Halong Bay, Jamaica’s Luminous Lagoon, and Mosquito Bay, Laguna Grande and La Parguera in Puerto Rico. That said, you don’t have to travel outside the U.S. to find this other-worldly occurrence.

In Florida, there are places where it’s possible to observe bioluminescence, including Navarre Beach, St. Joe Bay and even along Florida’s Scenic Highway 30A.

Unfortunately, in most places, bioluminescence is not predictable enough to say precisely when and where it will occur.

Researchers say you have the best chance of seeing bioluminescent waters during Florida’s summer months, from June to September. That’s because dinoflagellates reproduce when the weather starts getting hot, and those higher numbers make for spectacular viewing. Of course, one’s chances also increase when the moon isn’t illuminating the evening sky, so if bioluminescence is the light you seek, plan your trip when there isn’t a full moon.